Down The Rabbit Hole With Jason Raish

Take a tumble down the rabbit hole and find yourself in the absurd world of Jason Raish’s wonderland. Bamboozled by steampunk goggles and vehicles galore, each bespoke design plants itself on the whisky bottles of Rabbit Hole Distillery. 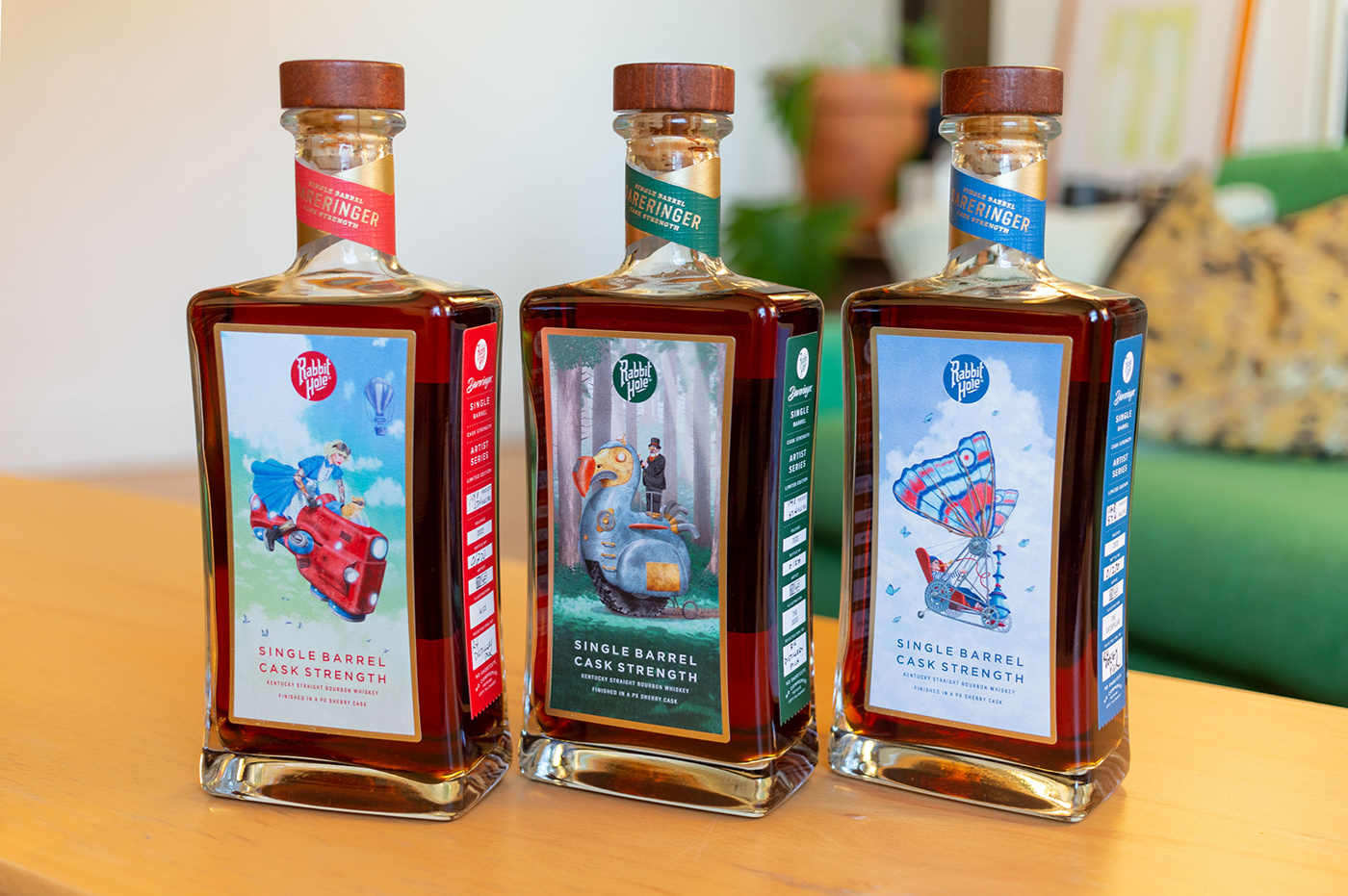 We love your latest designs for Rabbit Hole Distillery! It would be great to learn more about your reimagined Alice in Wonderland characters - what was the brief and how did the commission come about?

The distillery has done at least 3 other artist series labels with Alice in Wonderland as the theme and they wanted to continue that theme with me. The brief was to reimagine Alice in Wonderland characters for 6 different labels and they didn’t have to necessarily be the big dogs like the mad hatter and the white rabbit.

I previously worked on an illustrated Father’s Day social media campaign with them. In the beginning, I purely did character sketches such as Alice standing there looking all grown up, with tattoos and combat boots as a Raku Kiln firing ceramics badass,  but they wanted something that was a bit different - more special. So, I had to shake off that frustration and brainstorm for another week, which led me to develop a steampunk vehicle riding motif. It was an immense amount of work but the final product - the bottles - were printed beautifully and even raised spot gloss on key parts so it was all worth it. There’s nothing like holding the final product in your hand!

The influence of your background in fashion illustration and mentoring students at The Fashion Institute of Technology (FIT) is woven into your work, from the clothing to the accessories of each character. What role would you say fashion plays in your work?

Fashion plays a huge role in my work and is probably one of the top reasons art directors are drawn to my work. I think it fleshes the characters out and gives them a personality. You can say so much about a character’s backstory with just their clothing choices. I hope all the attention to detail and accessories make this series desirable and something you want to look at - I designed all the clothing and vehicles myself! 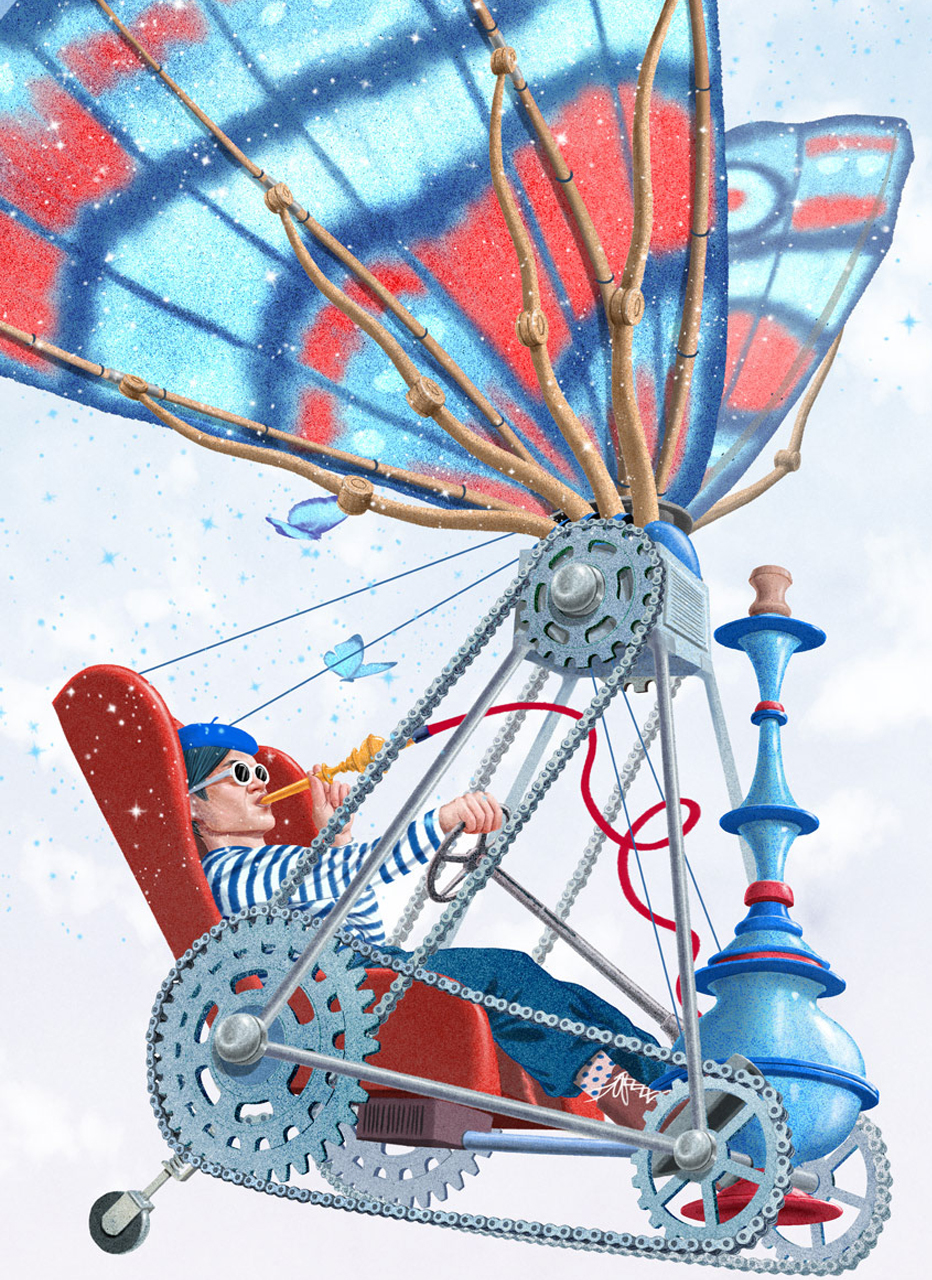 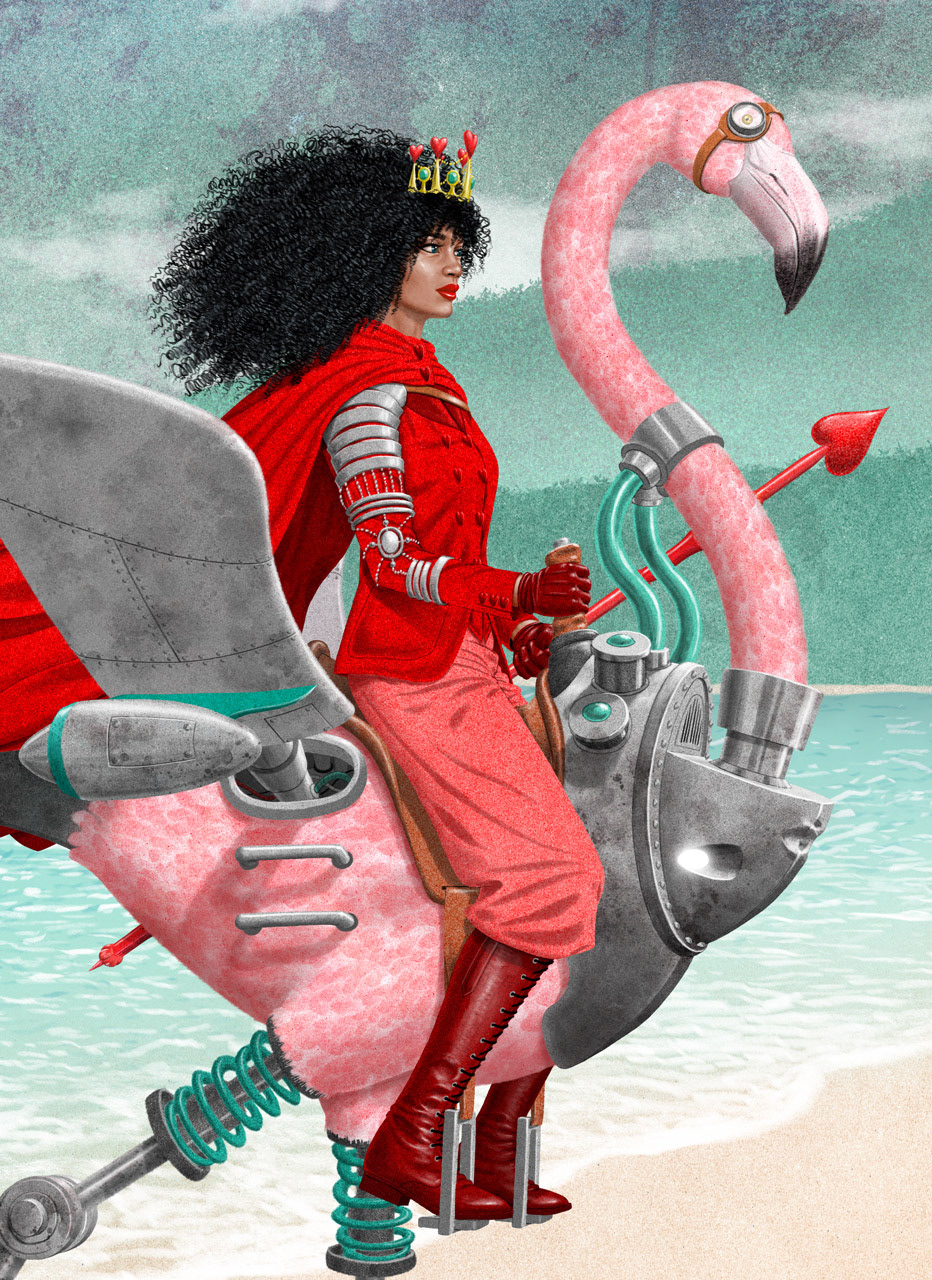 Please take us through your creative process, do you still pick up a pencil to create your art or is it all digital?

After putting in 10 years with graphite on paper, these days everything is digital. With this project it was days of brainstorming, researching the source material (Lewis Carroll’s book, the Disney animated film), seeing what’s been done before (which is A LOT), sketching and researching fashion choices, having the static character sketches rejected, shaking it off and brainstorming for days more and landing on a steampunk crazy vehicle riding motif.

After client approval, I researched steampunk vehicles to get granular details to make the vehicles slightly plausible. To execute the final drawings a lot went into it. I used digital graphite rendering and shading, then colour blocking of shadows and folds. I then added details like highlights and dirt, creating background settings for the chapters and delivering the client simplified layered files. It was a huge challenge coming up with something new for such beloved characters that have been reimagined so many times. 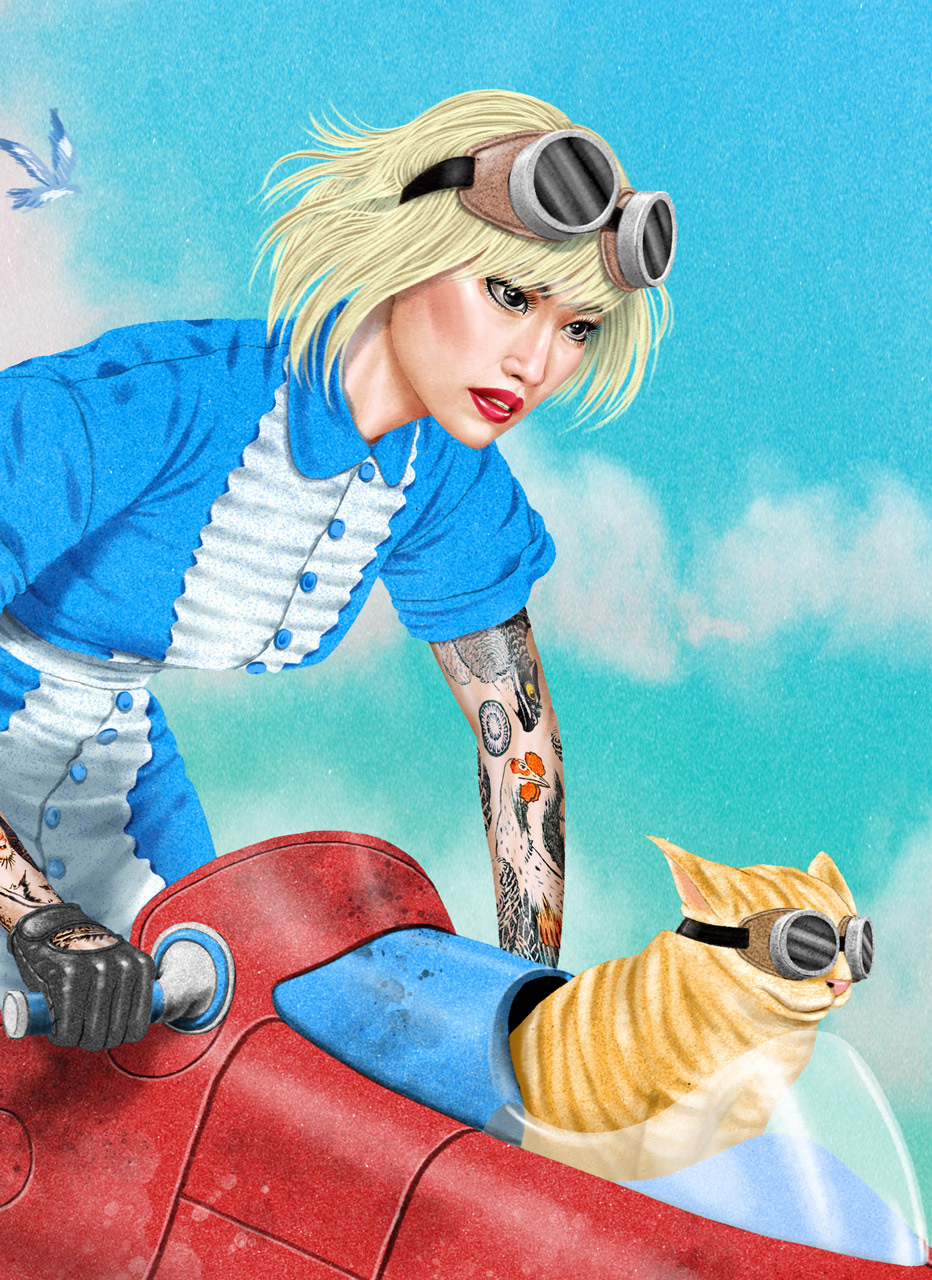 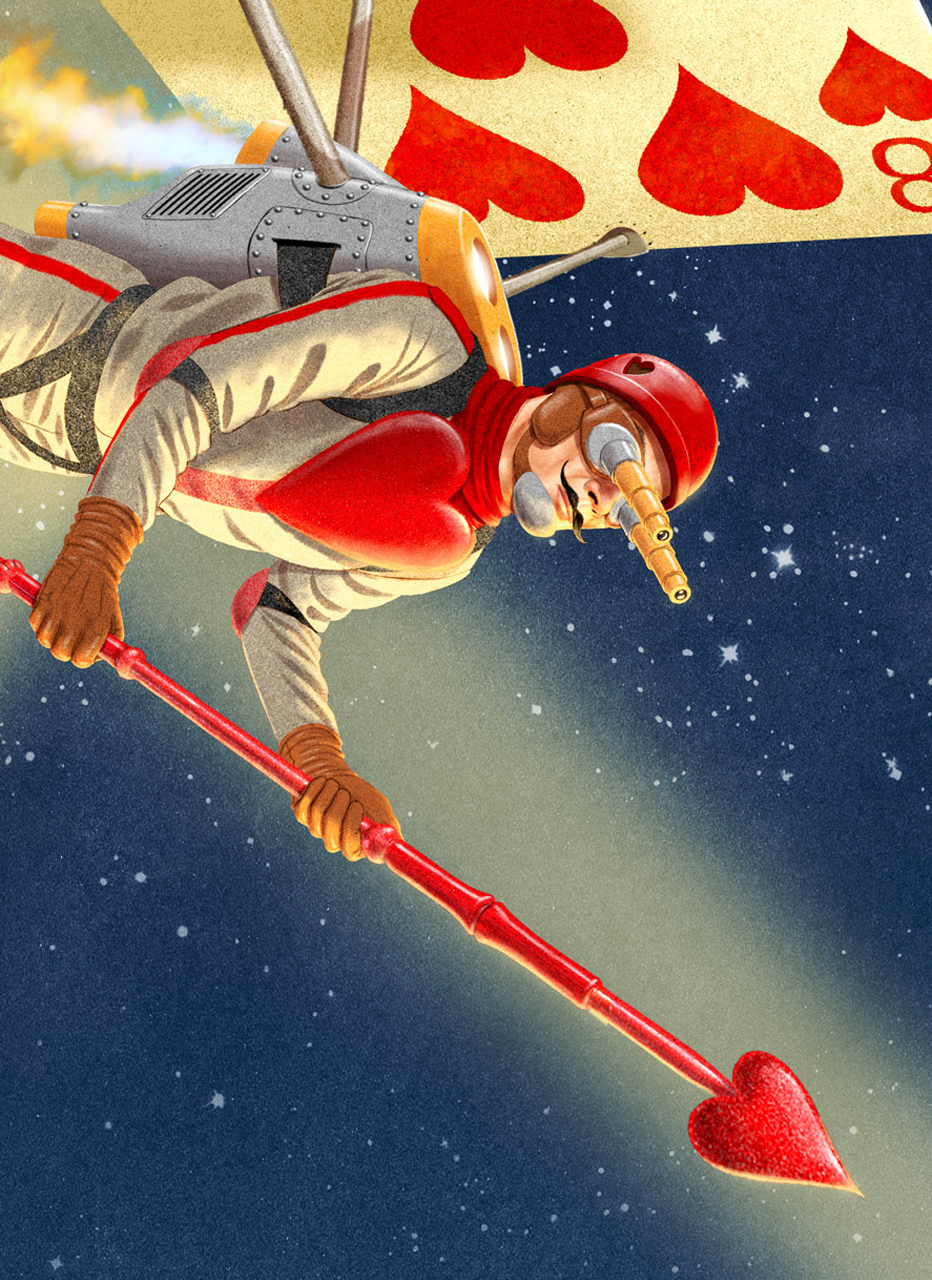 What other passions do you have besides illustration?

I like running the Prospect Park loop in Brooklyn with our rescue husky, growing vegetables on our rooftop garden, brewing beer, playing video games (since I’ve worked with Fortnite twice I’m addicted which is embarrassing), cooking food from all the countries I’ve lived in, and just relaxing on the couch with the wife and dog watching TV.